Menu
Get A Quote
Menu

In short, a PA system is a public address syste.  Also known as a sound reinforcement system, a PA system is an electronic amplification system used to get sound from the performer(s) to the audience. It’s made up of several components, and while one system can vary greatly from the next, each one handles these same basic functions:

Converting acoustic sound into electronic signals, most often with microphones or line inputs.

Amplifying signals with a power amp

Delivering the sound through speakers

Monitoring the performance with speakers or in-ear monitors

Different PA equipment will have different capabilities, features, and designs associated with each of these functions. Your specific needs will determine what you want out of each.

If you don’t want to get too deeply into the nuts and bolts of PA equipment, you might want to consider one of our complete, live sound PA system packages that include everything you need to get up and running. If you’re new to PA gear, these systems can help you avoid the problems that can arise from mismatched PA components. And by purchasing bundled gear, you can save a lot of money.

For solo acts, duos and other smaller groups that play in venues lacking a built-in PA, a modular tower system can be a clean, simple way to get heard with a minimum of fuss. These systems typically house a speaker array, mixer and power amp in a single, column-like structure that breaks down for easy transport. Because the components have been optimized to work with each other and the speaker arrays are designed to generate high-quality, room-filling sound, these systems offer an affordable, portable option to standard PAs.

The SPE Linear-Array PA System is an excellent example, delivering robust sound that’s highly intelligible and runs off of lithium-ion battery power. SPE engineers have created an array that serves up pro-quality sound to every corner of the room. A 10” subwoofer adds the kind of bottom end that can sometimes be a weak spot in similar systems. With its Bluetooth streaming capability, you have the option of going wireless—a great feature for active musicians, instructors, and other presenters who roam the stage or room. There’s also two USB ports to keep your mobile device plugged in and charged, with no fear of running out of juice. The 5-channel mixer is simple to use and lets you easily connect all your gear while on-board effects make it easy to dial in just the right sound.

The SPE Pro Series offers a variety of options for the professional musician or DJ looking for a super portable, all-in-one system. The three base models are the Pro315A ,Pro 800A and Pro 900A, so you can find the perfect PA system for your needs. Each  Pro system has a built-in mixer, with two combo XLR-1/4” inputs (with phantom power), 1/4″ and 1/8″ aux inputs and Bluetooth connectivity for hooking up your mobile device for streaming audio playback. Use the L1 Mix app for complete wireless control.

The 1,200-watt  3.5″ neodymium drivers and a 12″ woofer. The G1 Line Array PA System features a diverse range of input options, including Bluetooth, and it delivers 1,200 watts of powerful sound.

The SPE  G1 ffers four inputs and delivers 1,200 watts of peak output, making it a fantastic choice for the gigging musician.

One important question to start with in your PA system search is “How portable do I need the system to be?”

Traditional PA systems are made up of separate pieces of equipment for each individual function: a standalone mixing board, outboard signal processors, dedicated power amp(s), and a number of individual PA and monitor speaker cabinets. Such systems require considerable space to transport, store, and set up onstage.

If you need to transport your PA system frequently to different venues that have modest amplification needs and crowded performance spaces, there are portable, compact PA systems likely to meet those needs. In fact, there are even complete PA systems that include all of the necessary equipment within a single enclosure, roughly the same size as a standard PA speaker.

That said, super-compact systems also have their limitations. They do not offer as much control, customizability, or sheer sound output as a traditional PA setup. Generally, they can’t deliver the kind of high-power performance needed for larger venues, nor do they provide enough inputs for larger groups, especially those with miked drum kits.

If you have more advanced live sound needs but are looking for more portable options, you can find powered mixing boards and powered speakers that have integrated power amps, making a standalone power amp unnecessary.

Keep in mind, though, that powered mixers can still have limitations, particularly for bands that plan on expanding their PA equipment in the future. With individual components handling each function in a PA system, it is easier and usually more cost-effective to switch out, upgrade, and add individual PA components to enhance the system.

One of the most important questions when it comes to PA systems is “How much power do I need?” This is a consideration when purchasing a power amp for the system.The power amp’s job is to boost the low-level signals coming from the mixer and broadcast them through the speakers. How much power it produces is measured in watts. And you want to make sure you’ve got enough wattage to fill the venue without compromising the sound quality.

Exactly how many watts you need hinges on a number of variables. The most obvious of these is the performance location (room size, indoor/outdoor, acoustics). However, there are additional factors that complicate the issue. For instance, there is the efficiency of the speakers (i.e., how much sound the speakers produce per watt of power). There also is the concept of headroom (how much power it takes to handle peaks without distorting) and the desired volume level of the music.

Using speakers with average sensitivity, a rock band playing in a medium-sized club will need around 1,500 watts total power at a minimum, whereas a pop or jazz group might need between 250-750 watts. For simple folk music in the same venue, that requirement can come down to as little as 60 watts. Keep in mind though that these power estimates are generalizations; difficult performance spaces and music with a lot of dynamics can require considerably more power. As we note below, factoring in plenty of headroom will help ensure great sound when you’re performing in a challenging environment.

It’s important to buy an amp with plenty of power to drive your speakers plus enough headroom to prevent distortion. When shopping for speakers, you’ll see that they have a power rating, measured in watts. As a general rule, you will probably want an amp with twice the wattage of your speaker’s rated power handling to ensure a clean, undistorted signal gets to them. We will discuss this further when we cover PA speakers and their power requirements.

Keep in mind that a stereo power amp provides two channels, each able to drive its own speaker load. So if your amp provides 500 watts per channel, a pair of speakers rated for 250 watts would be a good fit. Note that the rated output for stereo power amps is usually given on a per-channel basis. A rating of “2x450W” indicates that the amp generates up to 450 watts into each of its stereo channels.

What is Bridged Operation?

Some power amps have a bridged operation mode. Also called mono or bridged mono, in this mode the load is connected to draw from both channels. That means the amp effectively becomes a higher-powered single-channel monophonic unit, even though both channels are being used.

What’s the Deal With Ohms?

One detail on the spec sheet that you want to be sure to check is the ohms rating. Ohms are a unit of measure for the impedance or resistance in a piece of gear.

It’s important that the impedance rating of your amp matches up to that of your speakers. If it doesn’t, there are ways you can work with your gear to make them match. That is, you can change the impedance of your speakers by wiring them in series or parallel. (We will discuss speaker wiring options a little later.) However, your safest bet is to buy power amps and speakers that match, particularly if you are not planning to expand your system.

Electronic signals from microphones and instruments need to be balanced, processed, and mixed together before they can be amplified and routed to PA speakers and monitors. In your live music PA, this is where the mixer comes in.

Mixers range in size from simple 4-channelto 32 channels units to much larger consoles that have hundreds of channels. A channel is essentially a signal path. A mixer with a large channel count allows more things to be connected and routed through it.

On a mixer, audio signals are assigned to separate channels, so a fundamental question to start narrowing down your mixer selection is “How many channels do I need?” Generally, you will want to make sure you have more channels than you think you will require. So it’s important to take an inventory of what you will be amplifying and make sure you have sufficient inputs and outputs while allowing for future expansion of your PA system.

For instance, if you are plugging a standard five-piece rock or pop band in to your PA, your first instinct might be to shoot for an 8-channel mixer. After all, that would allow for five instruments with room to spare. However, once you add up the inputs for everything you need for the group, you will find that your 8 channels actually won’t give you enough inputs.

With a five-piece band, the live sound arrangement might look something like this: one mic for lead vocals and one for backup (two channels), one mic for the guitar amp, one for the bass amp, and at least one direct input for synthesizers (three channels). Then there’s the drum kit, which will have its own miking considerations. With two overhead mics for cymbals, a mic on each tom, the snare, and the bass drum, you are looking at a minimum of seven mics for a fully miked kit.

This brings your total required inputs to 12 channels, so you’d want a model with a minimum of 16 channels giving you room to expand.

Getting to Know the Mixer 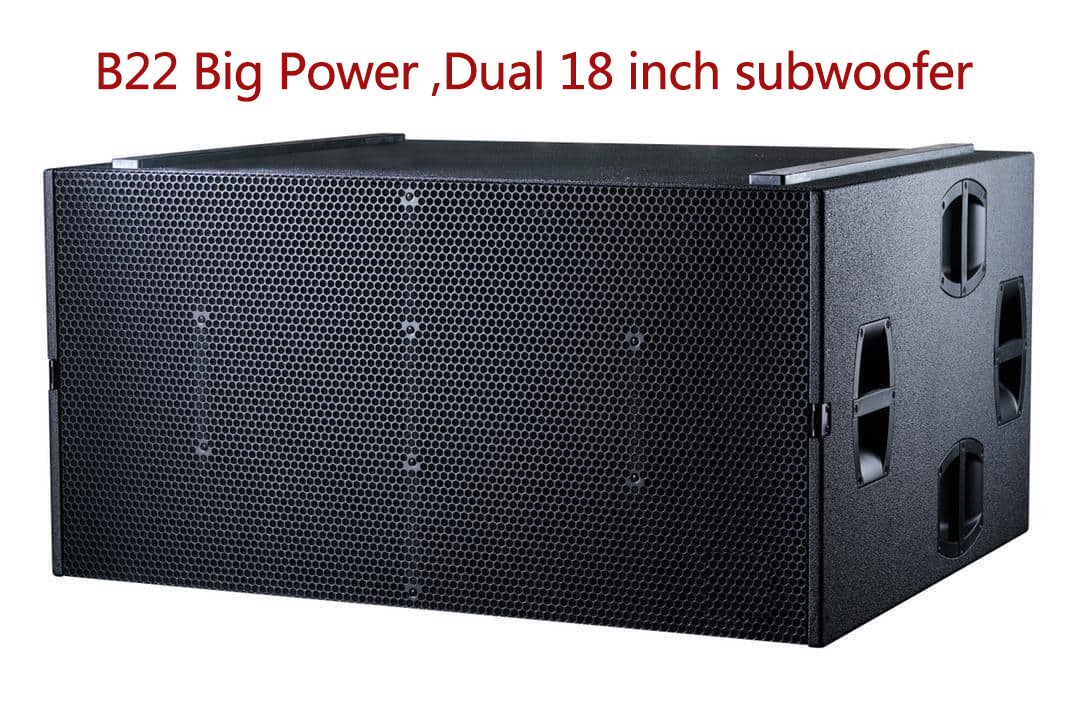 Why Choose Subwoofer ? What is the subwoofer ? 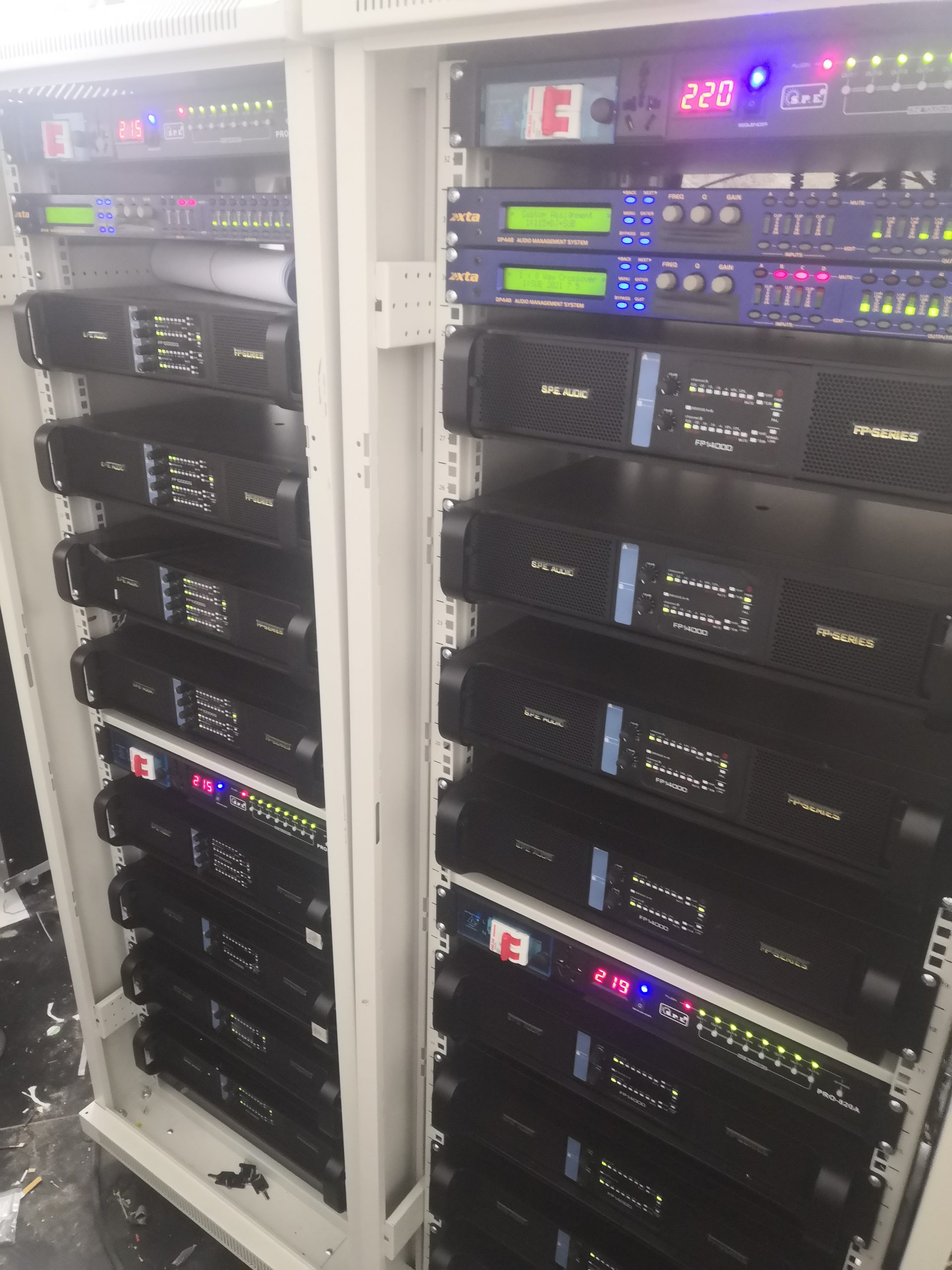 Installation sound equipment for the night clubs in hainan prodince,China

Advance and retreat with us

Sun Power International (HongKong) Limited have been founded in 1999, is an experienced and professional Sound Speaker manufacturer who are specializing in R&D

Let's have a chat